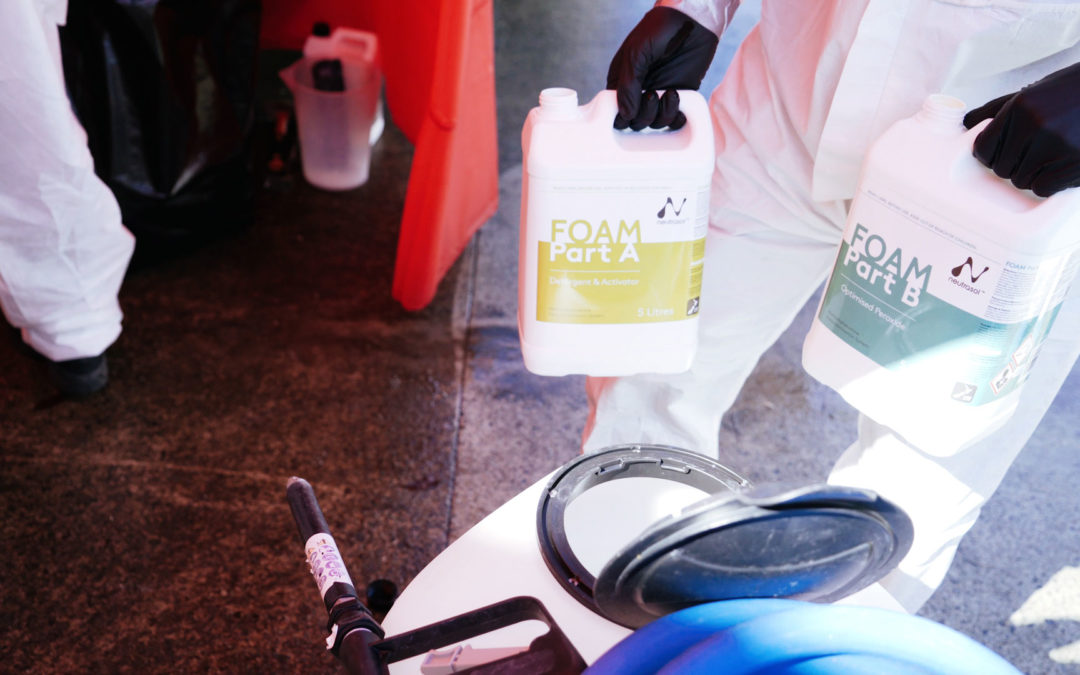 With approximately 700 clandestine lab busts per year and thousands more properties contaminated through heavy use, the business of methamphetamine decontamination is on the rise throughout Australia with a number of cleaning and restoration companies seizing the opportunity to diversify their service offering.

Whilst sugar soap products can certainly be effective in reducing low level contamination, it is the foaming method that is commonly adopted for excessive levels due to its ability to penetrate surfaces and draw out methamphetamine residue. Decon Systems’ exclusive Neutrasol Meth Decontamination System falls into this foaming category and is making a name for itself as the ‘go to’ product in its field.

To gain an understanding of how the Neutrasol system works we first need to understand a little about the surfaces that require cleaning and the nature of the methamphetamine contaminants.

Methamphetamine in its natural state is a solid. Through the smoking process it becomes a hot vapour which returns to a solid state once it cools on a surface. During the process of changing from a vapour back to a solid it can form strong bonds with the surface. In some situations, it doesn’t bond to the surface itself – but to soiling on that surface. In theory “a dirty house is easier to clean than a clean house” as the meth residue sitting on a film of soil is much easier to remove.

In addition to meth there can be other chemical residues. These can be in the form of impurities not removed during the cooking process, or if the premises has been used for manufacture there can be a range of cooking by-products. Many of these contaminants have been in a vapour form that have become airborne before settling and bonding to a surface. In a typical meth clean up situation there can be a number of different surfaces that are contaminated with chemical residues. Some surfaces such as glass are easy to clean and others such as varnish can be quite difficult.

After the removal of all carpets and soft furnishings the next stage of meth decontamination utilises the Neutrasol Prep Wash to clean down all surfaces. This step is designed to remove any surface film or soiling and consequently any meth residue that is attached to the film or soiling. Once this first stage is complete the foam wash using Neutrasol Part A & B can be undertaken.

As with many effective cleaning processes there are three factors that contribute to the removal of methamphetamine contamination:

The application of the Neutrasol Part A & B creates a blanket of foam that gives the Neutrasol extended contact time against the contaminated surface. As with many cleaning processes the longer the contact time the less abrasion or mechanical effort is required. Painted surfaces can absorb the meth residue – however, the foam blanket keeps the surface moist whilst drawing the chemical residues back out from the surface.

In situations where the contaminated surface has been painted in an attempt to cover the problem, the meth residue can naturally migrate through the new paint to give a positive meth test. Neutrasol can draw the residue through the new paint. This takes time and the stability of the foam blanket is such that the foam can remain intact for as long as 4 hours depending on ambient conditions.

Neutrasol contains a light oxidiser (optimised hydrogen peroxide) and blend of surfactants. This combination causes a chemical reaction at the surface that releases any residues that have not been abraded from the surface. Methamphetamine is not readily dissolvable in water but the combination of the actives and surfactants in Neutrasol allow the contaminant to be released from the surface, encapsulated in the surfactant foam and easily rinsed away.

Neutrasol Prep Wash and Foam A & B is manufactured in Australia in small batches ensuring customers consistently receive product of the highest quality and effectiveness.

The Neutrasol Meth Decontamination System will be displayed at this year’s RIA Conference and Trade Show on the Sunshine Coast, from the Decon Systems booth. Come have a chat to the team about the system and associated training programs.